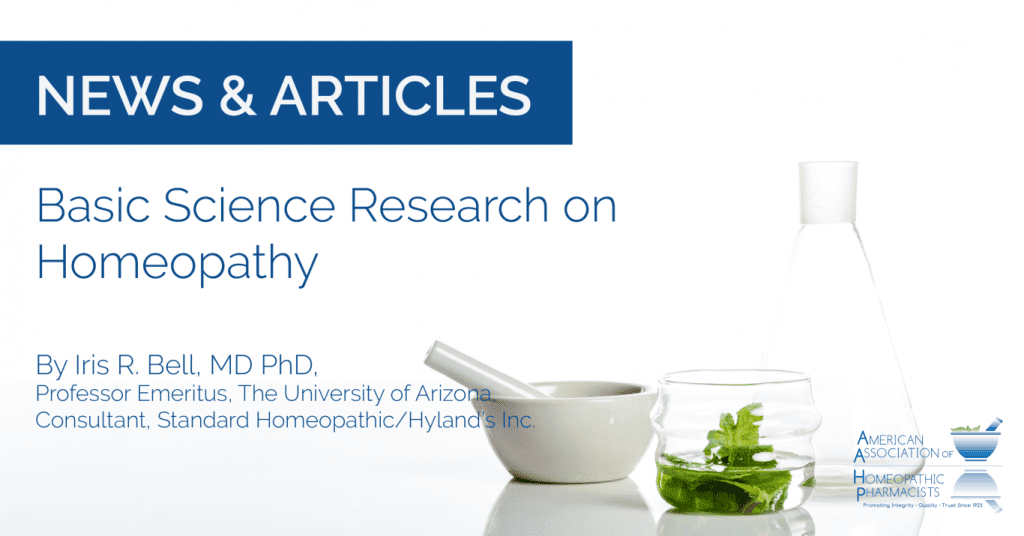 Recent basic science research on homeopathy has expanded understanding of the nature of remedies and their potential biological effects. This paper provides (a) a brief overview of key data and (b) this author’s perspective on a testable model for how the diverse findings converge. These advances are fueled by studies applying modern mainstream scientific concepts and methods from physical chemistry, biophysics, molecular biology and genetics, and complex systems science to evaluate homeopathic remedies and their actions.

The overall model for homeopathy is termed adaptive network nanomedicine.1,2 Figure 1 illustrates the proposed sequence of events. The events begin with (a) generation of nanostructures during manufacturing, which in turn (b) emit optical3,4 and electromagnetic signals,5 as well as possibly even some quantum messenger capabilities for biological systems.6-16

Such signals from relatively low concentrations (picomolar to femtomolar17) of nanostructures (1-100 nanometers in size18-20) serve as weak danger signals that (c) interface with the olfactory21 and immune systems to mobilize the adaptive cellular defense network of the body.2 Then, (d) the body as a complex adaptive system amplifies the effects of a given remedy signal and sets into motion a nonlinear self-similar self-reorganization process across the overall system as an interconnected network of bodily subsystems.22-26 Healing is ultimately an emergent nonlinear dynamical adaptive process in the living system/network. The complex systems nature of living systems carries on the net benefits for the organism.27-30

Multiple researchers have repeatedly demonstrated that homeopathic manufacturing methods generate remedies that include various sizes of source-derived nanostructures (where 1 nanometer (nm) = 10-9 meter in size and nanoparticles are < 100 nm),18-20,31-40 some with silica coatings.41 The smallest nanoparticles (<10 nm) are quantum dots, which can contain 10-50 atoms. Trituration is a mechanical milling technique similar to modern milling or grinding nanotechnologies that break down bulk forms into nanoscale forms of a given source material.42,43

The serial dilutions appear to remove bulk forms of source material, but carry nanoscale forms of the source from step to step.44 The sizes of the nanoparticles range from quantum dots (e.g., < 10 nm) to larger nanostructures (up to 100 nm). Quantum dot sized nanoparticles can generate quantum coherence and quantum entanglement types of phenomena.45-49

It is also well-established that many different plant extracts, including but not limited to Equisetum, Thuja, Hydrastis, Gelsemium, Phytolacca, Ruta, and Quercus 50-55 can themselves generate bioactive nanoparticles from precursors of other materials such as silica50 or metals like gold or silver51 in solution. The resultant nanoparticles retain traces of the original plant on their highly reactive surfaces, which in turn can modify their biological effects.51,53,56

Evidence suggests that the succussion (agitation) process releases silicates from the inner walls of glass containers57-60 that can adsorb around the source material nanoparticles to form a silica coating.41 Succussion or agitation can also embed nanoparticles onto the surface of the glass, from which they can diffuse back into solution over time61 (cf., Korsakovian method).

Furthermore, succussions cause formation of nanobubbles in the liquid solvent,40,44 which can surround the nanoparticles to produce layers in solution. In turn, pipetting via the Hahnemannian method will variably sample layers with higher (or lower) concentrations of nanoparticles during transfer in performing dilution steps.44

The biology of living systems happens at the nanoscale level. For example, both normal and cancerous cells use exosomes, i.e., nanosized vesicles of cell membrane carrying nucleic acids, proteins, and lipids to biologically communicate with other cells.63-65 Exosomes participate in  microenvironmental signaling and information processing.65,66  It is possible, though not as yet studied, for instance, that a dose of nosode remedy such as Carcinosin might provide low dose tumor exosome-based signals (see below) to trigger hormetic reversal of pre-existing pathology. Disease-derived exosomes are among the modern strategies in nanomedicine to treat various conditions, from influenza to allergies to certain cancers.64,67,68

Separate physical chemistry and biophysics studies69 have shown that homeopathic remedies can emit electromagnetic70-72 and optical signals.3,4,73-75 Other techniques using solvatochromic dyes also support the concept that a homeopathic remedy carries signal properties.76-78 Various nanostructures are capable of emitting light (optical) and electromagnetic signals.79-82 Silica is both a biological adjuvant83-87 and an electronic amplifier of nanoparticle signals.88-92 Extremely small quantum dots trap source material atoms and their electrons on the particle surface, leading to photon emission in certain circumstances.93

In this model, the sensory systems, especially in the olfactory system,94-97 skin98,99 and other mucus membranes,100,101 and the immune and inflammatory systems102-113 (part of the cell danger/damage defense network, involving damage-associated molecular patterns - DAMPs) serve as biological interfaces with the remedy signal information.2 Studies have repeatedly shown that the human central nervous system (CNS), for instance, registers the presence of an individually-salient remedy by sniffing, without direct physical contact with the nose.114-116

Other studies have demonstrated that remedies modulate macrophage/phagocyte and T-cell activities,107,117 heat shock protein (HSP) activation,112 cytokines,108,118 and reactive oxygen species (ROS, oxidative stress)119,120 (see also Figure 2). It is known that (a) nanoparticles, especially smaller sizes such as 1-7 nm, can not only access the olfactory nervous system,94,121,122 but also trigger the cell danger defense networks or DAMPs of the immune system123 and, thus, hormetic adaptations.17,124-126

Skeptics will still object that any homeopathic remedy nanostructures occur in comparatively “low” quantities (e.g., data reveal 2x108 particles per milliliter)34 that may not induce direct pharmacological effects. However, even conventional nanoparticles at very low doses (within a similar concentration range to those in remedies) elicit persistent changes in gene expression patterns and other biological effects.127-129 In homeopathy, a series of studies with different remedies 37,105,130-135 has shown modulation of complex gene expression patterns as an early component of the unique, remedy-related biological response cascade in mammalian and human cells. In addition, other studies previously showed remedy-induced gene expression pattern changes in bacterial, yeast, and plant cell models.136-138

Homeopathy, especially at higher potencies, never claimed to exert direct pharmacological or conventional biochemical effects. The relevant feature is that the remedy serves as an exogenous danger signal to initiate a nonlinear cascade of adaptive changes across the physiological networks of the organism124,139 (Figure 3).

Rather than focusing on conventional pharmacological dosing and effects, the more relevant issue is whether or not a dose of specific homeopathic nanoparticles can deliver a low intensity hormetic signal from the original source material to living cells.140-143 It is already established that low doses of nanoparticles from various types of source material can initiate the adaptive response of hormesis in living systems (low dose stimulation versus high dose inhibition).124,125,139

All of these processes need a complex adaptive system in which to occur.139,147 In hormesis, low doses of a salient signal can initiate adaptive changes in the recipient living system as a network that leads to strengthening the cell’s or body’s capacity to resist or reverse the effects of higher levels of the same or a cross-sensitizing stressor/agent (biphasic dose-response). Evidence that remedies cause changes in gene expression patterns and modulate immune function provides support for additional studies of potential biological mechanisms underlying such adaptive responses.148-150

One implication of this adaptive network nanomedicine model1,2,42 is that the past history and emergent state of the individual biological adaptive system at the time of dosing determines how the organism can and will respond to a given dose of a remedy.151  That is, “similia similibus curentur.” It follows that the course of the biological response in homeopathy depends on the signal quality, nature and persistence of adaptive biological response of the organism.152 145,153