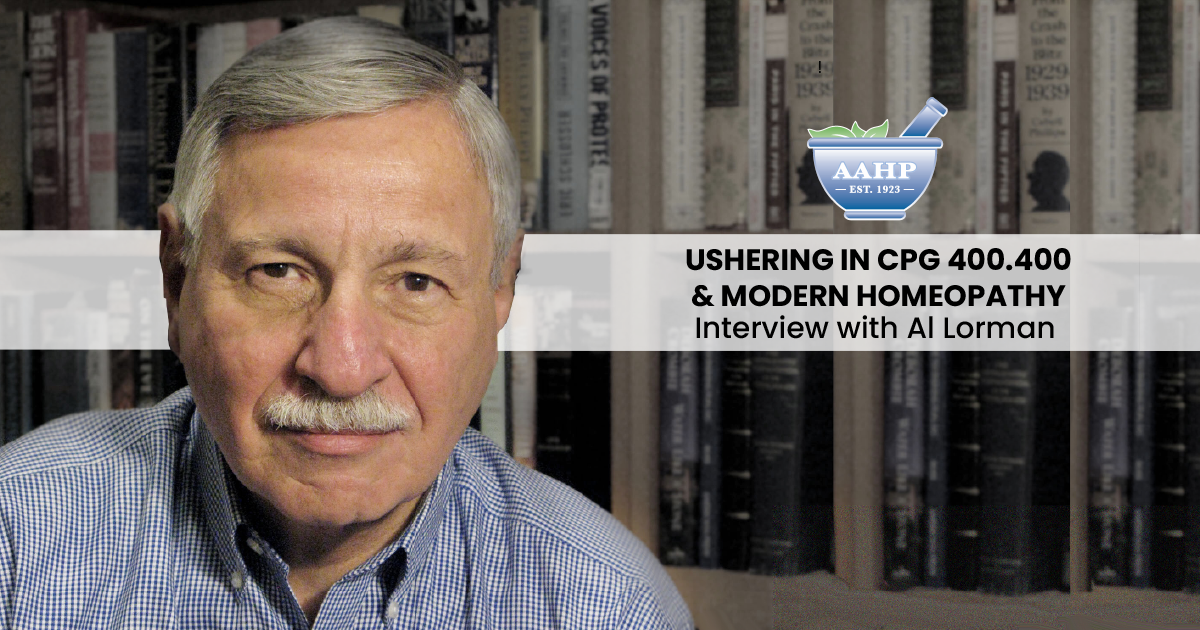 For those in the AAHP community who don’t know him already, we’re thrilled to introduce you to Alvin J. Lorman. Not only is Al our legal counsel, but he has been working with AAHP and the homeopathic industry since 1985. In fact, Al helped negotiate CPG 400.400, which ushered in the modern homeopathy market in 1988.

Read on to learn about Al’s 37 years in our field, his involvement in legal/regulatory milestones, and his thoughts on the current state of the industry—including the implications for members now that FDA has revoked CPG 400.400.

AAHP:  When and how did you begin practicing law for the homeopathic industry?

AJL: To be honest, I’m not sure that I had heard of homeopathy before 1985, when I joined a law firm which represented AAHP, the Pharmacopoeia Convention, and a number of homeopathic manufacturers. Before 1985, I’d been at Covington & Burling and the Consumer Healthcare Products Association. So I had a lot of experience in food and drug law, but very little concerning homeopathy. Starting in 1985, I hope I learned pretty quickly.

AAHP:  You worked with Dan Michels, at the FDA at the time, to negotiate the Compliance Policy Guide (CPG) 400.400. What was your experience there, and how did it impact the industry.

AJL: Prior to the adoption of CPG 400.400 in 1988, there was an FDA Compliance Policy Guide which stated that all homeopathic drugs were prescription only because of the claimed individualization necessary for their use. However, FDA took almost no action against U.S.-made homeopathic drugs while frequently detaining or otherwise causing problems for imported products. An ad hoc industry group met with senior FDA enforcement personnel and argued that the policy of taking no action against domestic products while barring foreign products was a violation of U.S. trade treaty obligations, which could lead to a complaint in an international tribunal. FDA tasked Dan Michels, then head of drug compliance, to come up with a solution.

We prepared a background document to educate Mr. Michaels about homeopathy and proposed a regulatory scheme that would serve the interests of FDA, consumers, and the industry. Over the next two years, I periodically met with Mr. Michels and Charma A. Konnor of his staff to discuss a workable solution.

FDA issued CPG 400.400, Conditions Under Which Homeopathic Drugs May Be Marketed, in 1988, thus beginning the modern age of homeopathy in the U.S.

AAHP:  From a legal perspective, how has the industry changed since you began working with homeopathy?

AJL: The most obvious change to the industry has been its growth. In 1988, one did not see many homeopathic drugs in places like CVS, Walgreens, Target, and Walmart. That change was due, at least in part, to clarifying the legal status of these drugs. CPG 400.400 made it possible to look at a homeopathic drug label and conclude whether or not it was likely to run afoul of FDA, making the sale of homeopathic drugs “safe” for the retailer. It also achieved its original intent: most products cleared customs without incident. I won’t say that the industry never had an issue with FDA, but, in general, those issues generally were resolvable.

Unfortunately, I think the legal status of homeopathic drugs is cloudy again because of FDA’s revocation of CPG 400.400 last year. FDA has been reexamining its policy toward homeopathic drugs since 2015. It revoked CPG 400.400 and has a pending draft policy which provides precious little guidance to industry or FDA investigators. I’m not sure how that will shake out. Also, last year, FDA decided that homeopathic injectable drugs were unapproved new drugs and could not be sold without approved New Drug Applications, even in the absence of any reported adverse events.

One significant legal change has been the adoption of the label and advertising disclaimer policy created by AAHP. This policy, backed by academic consumer research, shows that consumers understand that homeopathic drugs are not the same as allopathic drugs. That distinction was very important to the Federal Trade Commission.

AAHP:  What are some of our industry’s biggest challenges and opportunities today?

AJL: I think one of the biggest issues facing the industry is appropriate compliance with current Good Manufacturing Practices. FDA has made it clear that homeopathic manufacturers are subject to the same requirements as any other drug manufacturer. I suspect some in the industry have a lot to learn about cGMP.

Another challenge is the continued availability of homeopathic drugs. When FDA started the allopathic OTC Drug Review in 1972, it purposely did not include homeopathic drugs, saying it would conduct a separate review after completing the allopathic review. Of course, the OTC Review is still ongoing, and it is unlikely that FDA will ever conduct a homeopathic OTC review. Instead, with the revocation of CPG 400.400, FDA appears to have adopted a policy of regulation by press release and selective enforcement actions.

FDA’s new draft policy essentially says that all homeopathic drugs are unapproved new drugs (i.e., illegal) and it outlines the agency’s enforcement priorities concerning those drugs. Having these products called unapproved new drugs doesn’t necessarily keep me up at night since about a thousand or so allopathic Rx drugs have exactly the same legal status. FDA prioritizes its limited resources, which, from a public health standpoint is entirely appropriate, but it does add some uncertainty for the industry. FDA has said that it does not intend to remove all homeopathic drugs from the market, and I believe it lacks to personnel to do that even if it wanted to.

Finally, FDA has permitted diet supplement sellers to make what many of us think of as drug claims, so the homeopathic industry is competing with the far larger diet supplement industry for OTC consumer health dollars.

AAHP:  What does the future look like for our industry? Five years out, 10 years?

AJL: I’ve never been very good a crystal ball reading, but my guess is that the industry and the marketplace will not be radically different in five years than it is today. We will probably see the same challenges and the same opportunities. I make no prognostication of what the scene will be like in 10 years.

AAHP:  What is the best piece of professional advice you’ve received over your career?

AJL: My practice has largely been confined to representing clients before state and federal government agencies. Probably the best advice I received was this: When trying to solve a conflict between a client and a government agency, look for a solution that works for both parties. That is why we got CPG 400.400: FDA wanted to avoid a lawsuit for giving illegal preference to U.S. manufacturers and the industry wanted a level playing field. The result was some 30 years of relatively peaceful coexistence.

AAHP:  What is your greatest accomplishment in your work with our industry?

AJL: Clearly the adoption of CPG 400.400 was my biggest win for homeopathy, probably followed by designing the label disclaimer program that probably helped head off significant FTC enforcement action. But I hope I haven’t been coasting since then.

AAHP:  Before we go, we heard that you attended the same college as Eric Foxman.  Do you have any stories you’d like to share?

AJL: Eric and I did not know each other then. We actually attended the same university but not the same college. Eric attended the School of Pharmacy, and I was at the College of Arts and Sciences. The location of our respective colleges was different. Both, however, were in downtown Brooklyn, now one of the country’s hippest locations, but not so back then. My campus was across the street from Juniors, a restaurant famous for cheesecake. It was also famous for not checking IDs when you went to the bar. The drinking age was 18 back then. The first and only time I was carded at Juniors was when I went there to celebrate my 18th birthday. They refused to serve me because I had not yet received the draft card I had registered for that day.

AAHP: Thank you Al for sitting down with us and for your 37 years of contributing to the stability and growth of the U.S. homeopathic market. AAHP members are reminded to join Al for his bi-annual updates. His next address—exclusive to members—will be at the upcoming virtual AAHP Annual Membership Meeting, March 23, noon–2 p.m. ET. Register for free here.